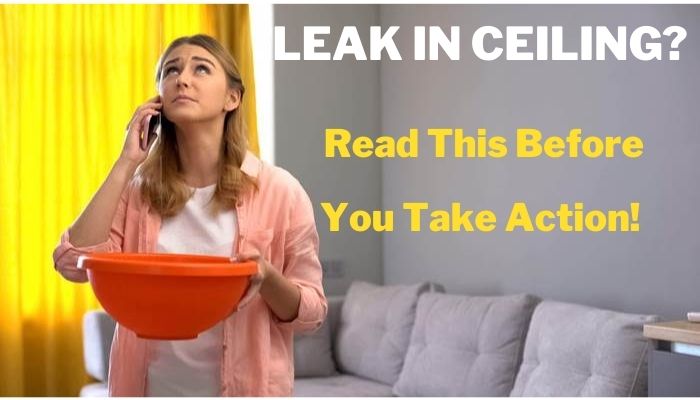 It’s understandable to feel panic when you notice a leak in the ceiling. Nobody wants to suffer costly property damage as a result of a leak, after all!

However, the good news is that most ceiling leaks can be stopped fairly easily, at least on a short-term basis.

Read on to learn everything you need to know about ceiling leaks: when they’re considered an emergency, what causes them, who to call, and how to stop them.

Is a Leaking Ceiling an Emergency?

So, you’ve discovered a small leak and you’re wondering what you have to do about it. Maybe you’re hoping the issue can wait a while since the leak looks fairly minor.

Be careful! All leaking ceilings must be taken seriously and treated as an urgent issue. A small water leak can turn into a big problem fast, so there’s no time to waste.

Unless you pay for an emergency plumbing service, there’s no guarantee that a plumber will be able to attend as soon as you decide it’s serious enough.

You may be asked to wait a few hours for your appointment. That’s why it’s important to make one as quickly as you can!

What are the dangers of waiting around? Well, the worst-case scenario is that your entire ceiling ends up collapsing due to the weight of the water that’s accumulated

Bear in mind that this plumbing issue may not be brand new. You’ve just noticed it, but the leak could have been developing for some time.

Now that you’re aware of the issue, there’s no excuse not to take action!

When Is a Water Leak an “emergency”?

Look for the following signs that you need to take emergency action with regards to your water leak:

If you’re noticing one or more of these signs in your home, don’t delay in taking action.

The longer you procrastinate, the more likely it is that you’ll end up with property damage to deal with.

Prevention is better than cure, so prevent the leak from worsening before it makes a major mess of your living space, leaving you with an expensive repair bill.

What Causes Water Leaks in the Ceiling?

Water leaks in the ceiling can be caused by many different factors. For example, they could occur due to a simple plumbing issue such as the caulk of the pipes wearing off or rusty or sweating pipes and pipe fittings.

Any of these faults could result in water dripping through the ceiling, especially if a kitchen or bathroom is above where the leak is located.

Another cause might be a damaged roof. If tiles or shingles have been moved or broken, you might find water entering your house through the ceiling. This can happen at any time of year.

When the water coming through the roof is dirty, this is an indication that the roof may be at fault rather than a water pipe leak.

If you’ve checked and neither of the above diagnoses applies, look at your appliances.

Faults in refrigerators, dishwashers, or washing machines can result in leaks because they have both a water supply and a drain line.

In cold or changing weather, burst pipes could cause a leak in your ceiling. This is because the water within expands due to extreme temperatures.

Keeping central heating systems on during harsh winters can prevent this from happening.

How Do You Temporarily Stop a Leaking Ceiling?

Before you can stop a leak from coming through your ceiling, you first have to identify its source. Is it due to a faulty pipe?

If so, you can focus your attention on patching up the pipe or cutting off the water supply to this area.

One way to patch up a pipe is to use plumber’s epoxy. This is an effective quick-fix until your plumber arrives to carry out a full repair, and it’s relatively easy to use.

What about if it’s due to roof damage, though? In that situation cutting off water won’t change a thing and plumber’s epoxy isn’t appropriate.

One option you have is to cover the affected part of the roof with a piece of tarp. This will stop rain from entering your home.

Be sure to take all required safety measures if you’re climbing a ladder up to your roof. Property damage is preferable to bodily injury.

If an appliance is causing the problem, you should be able to isolate this easily by turning off the water supply to your washing machine, refrigerator, or dishwasher.

The short-term inconvenience of reduced water access is worth it to limit the damage.

Do I Need to Replace Ceiling After Leak?

If you have suffered a ceiling leak that isn’t too serious, your first step should be to dry it out. This can take anything between 2-4 weeks, depending on how severe the leak was.

A dehumidifier could be useful for drying out your ceiling more quickly, or you could use air fans to accelerate the process.

The idea is to involve contamination where possible. Moisture leads to rotting and must, and that’s bad news for a ceiling.

Whether you need to replace the ceiling or not depends on how serious the damage is.

If your drywall ceiling started to sag during the leak, for example, it’s likely to dry that way.

It will at least need significant repair, if not replacement.

Only the very worst of water leaks require the complete replacement of the ceiling; for example if the ceiling totally collapsed.

In less serious situations, removing the damaged sections and replacing them should be enough.

You should hire a professional plumber to assess whether the damage is superficial or structural.

They will confirm whether you need to replace your ceiling or not. Who do you call for a leak in the ceiling? 164

It’s a good idea to have a local plumber’s contact number saved in your phone for these emergency situations.

Before you choose a particular plumbing service, ask for recommendations from trusted friends. Someone is bound to know a dependable plumber that operates in the area.

It’s also a good idea to request quotations from multiple plumbers in order to compare their prices. Remember, emergency plumbing services can be expensive!

If you’re able to safely isolate leaks that occur out-of-hours and wait a little longer for your service., you could save yourself a significant amount of money.

Unable to identify the source of the leak yourself? Unfortunately, you’ll have to pay out for urgent support.

The bill may be painful, but the cost of repairing serious structural damage is undoubtedly more. The goal should be to avoid that outcome wherever possible.

Any fixes you perform should be considered short-term: a temporary solution until a plumber is able to provide a comprehensive fix.

DIY is an amazing hobby, but plumbing requires specialist training, and it’s not worth taking risks on something so potentially damaging.

Now you know all you need to know about a leaking ceiling! You’ll be prepared the next time you notice a distressing drip coming from above: you’ll know both who to call and how to put a temporary stop to the leak.

Remember, this is not a household issue to be ignored. The quicker you take action, the less likely it is that you’ll end up with expensive property damage.

Having experienced significant success as a house flipper, I am often approached with questions about all things home improvement. That’s why I decided to start this site. My objective is to share all of the insights I have accumulated over the years so other people can design the homes of their dreams.