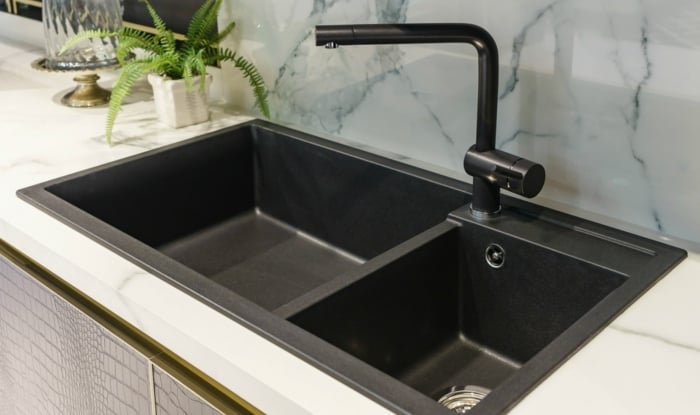 If you’ve been dreaming of getting a black tap but you keep wondering if it’ll be a great choice, then you’ll need to read this carefully.

No doubt, black taps are stylish additions that can enhance the look of any kitchen or bathroom.

I love the way they blend in with any decor. I’m sure you do too and that’s probably why you want to buy them! But despite the great benefits, you’re still wondering what cleaning them will be like, or if they scratch easily.

I understand how you feel and I don’t want you to make a choice you’ll regret.

So here, I’m going to be answering five key questions you’ve been looking out for. Ready? Let’s get started!

Not exactly, I’ll say what they require is extra care.

If you are the type of person that loves to clean even when there seems to be no stain or dirt, you won’t have much of a problem with black taps. But you’ll have to do it the right way though!

I have a dark blue sink at home, so I know for sure that dark fixtures usually come with their special cleaning problems.

It’ll look all clean and good at first, so you’ll hardly notice the stain cause it’s dark.

Then, if you are like me you’ll relax and not be so serious about cleaning. Then all of a sudden you’ll begin to discover build-ups and stains. It can be annoying, But here’s the trick!

If you love black taps, you can go for them. But you’ll have to clean them even if they appear neat and fine.

Keep a towel handy or microfiber cloth to clean your black taps after each use.

This is very important if you apply makeup products such as brown powder in the bathroom, they’ll likely fall on your taps if you’re not so cautious.

And trust me, you won’t like the cloudy look the powder will give your black taps.

Even if you don’t use makeup in the bathroom, wiping your taps will help to remove dust at least.

This cleaning thing may be a bit weird, after all, they just tap right? But they are beautiful and you want to keep them that way.

Anything scratchy or abrasive should not be used, so you want to mark out bleaches or anything acidic like a lemon spray.

Make sure to dry them well to avoid watermarks on the outer finish.

If you’ve got hard water, you should dry your black taps very well. If not, you’ll be mad when you start to find limescale on them.

But that’s still not the end of your classy black tap, there’s an easy way to get limescale off, I’ll share that here too.

I have a friend who goes the extra mile with a water softener, so it’s up to you! Do you love black taps that much? Are you willing to take extra care of them?

Would you be using your kitchen or bathroom with family members? Would they be willing to take extra care too?

You see, black taps are actually easy to clean. You only have to be a bit more careful, cause any little mistake with hard chemical cleaners or harsh disinfectants and your perfect black tap is gone.

First, it’s good to know that any metal coating can scratch, and black taps are no exception. If you handle them wrongly, they’ll certainly scratch and leave a mark.

I know we make mistakes sometimes, but you want to try as much as possible to prevent this.

So basically, it also depends on the finishing of your black taps. Most of them come electroplated, and they are a bit pricey but less prone to scratches.

The powder-coated finishes are great, but you’ll have to be a super careful person not to get them scratched in a few months.

Although most black taps are hard to scratch, you’ll still need to be extra careful, especially during installation.

So you want to make sure the plumber you’ve hired to install your black taps takes special care to avoid scraping the surface with plumbing tools.

I almost forgot this part, ensure you check your new tap once you take them out of the pack, you want to make sure it’s in perfect condition.

Did I tell you your rings can also be a problem?

So you can either decide to avoid putting them on while using the tap or be extremely careful to avoid scratching your black taps.

You may want to go for one with a double-coat electroplated finish if you’re particularly concerned about scratches.

3-Are Black Taps Still in Fashion?

Yes, they’ll surely be around for at least the next five-ten years.

If you are looking to revamp your kitchen or bathroom tap to something more trendy, black taps won’t be a bad choice. They’ll add this sweet Swiss touch to your room.

One thing you’ll love about them is that they blend in with just any bathroom or kitchen style, and they are still very fashionable.

Have you seen how they look in a monochrome bathroom style? They are effortlessly sleek and stunning – the real deal.

But I can understand how you feel, you’re wondering if they’ll date soon after you choose them. Black is such a trendy color and it’s here to stay especially for bathroom fixtures.

But if you are out for the latest trend that’ll look a bit more exclusive, you may consider a newer option.

Black taps have been around for a while and they are already very popular! However, a lot of people are concerned that they could become a time marker when another trend emerges.

If you simply love the “wow” look black taps give room, don’t let this stop you from getting what you want.

After all, black is a neutral, timeless color, and I’m sure it’ll be around for many years.

For the black taps with a special electroplated finish, they’ll last more but with time, they’ll eventually fade.

But then, you can keep your lovely black tap looking sleek for a longer time by wiping them with a microfiber cloth after each use.

This can be stressful, but you want to do this if extending the great look of your black tap means a lot to you!

And then, don’t forget you can always retouch them and get them to look just as before. If you adore black taps so much, don’t let this hard fact put you off!

5-How Do You Remove Limescale From Black Taps?

If you live in an area with hard water, limescale is likely going to be a serious issue for your black taps. They tend to build up very quickly, so it’s not something you want to trivialize.

Believe me when I say I know how frustrating it can be to discover limescale on your stylish black taps especially if they are only a few months old.

But these marks are not impossible to get rid of, let me tell you how to remove limescale without damaging your black tap.

But more importantly, ensure you dry your black taps to prevent watermarks.

If this method doesn’t work for you, then you should use a mild limescale remover like Viakal.

Some people have asserted that using vinegar and lemon juice has worked for them, but I’ll advise you not to try this. Even if you want to, first contact the manufacturers of your black taps.

They’ll be in the best position to tell you what to do. Some companies even offer after-sales service, so they’ll come to your rescue.

Like I’ve said earlier, any harsh cleaner can damage your sweet-looking black tap.

I want you to make a choice that you’ll be happy with for years. So what do you think? Are you willing to take an extra step to keep these trendy black taps in your space?