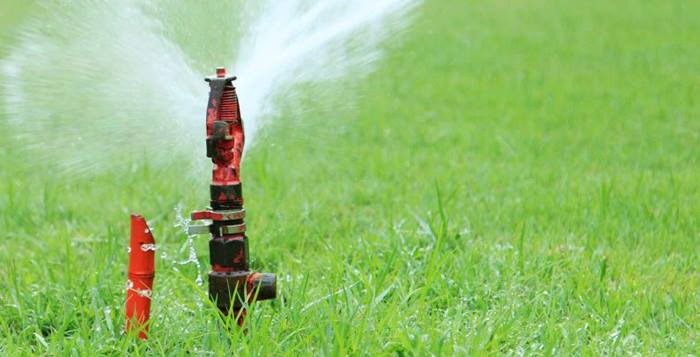 When you fail to winterize an irrigation system, chances are your pipes are frozen from extreme cold, eventually leading to them breaking.

Any water left in the pipes of an irrigation system may get frozen solid if you live in an area with freezing temperatures as well as snow.

When the ground freezes it leaves exposed pipes vulnerable.

If you fail to winterize an irrigation system, chances are your pipes will get frozen from extreme cold, eventually leading to them breaking.

Any water left in the irrigation lines may get frozen solid if you live in a freezing weather area with snow.

If your sprinklers have a manual drain valve, you’ll have to manually open all of the air vents to drain the system. Turning off the water supply is the first step.

A backflow device should be installed to prevent water from flowing back into the residence. Make sure this valve is closed so that all of the water from the sprinklers flows out.

Then you just let gravity take its course and force the water out of the pipes at the system’s lowest points.

Check for any check valves or a backflow preventer that could be stopping water from flowing freely out of the system and open them.

Close all of the valves fully once the water has been drained.

Manual drain outlets are no longer always sufficient. Some water from your main water supply may become caught in the low spots of the pipes and fail to drain from the sprinklers.

You can avoid this by putting antifreeze in the pipes, or you may use the sprinkler blowout system, which we’ll go through later.

If the air pressure in the pipes drops below a certain amount of pounds per square inch, some sprinkler systems feature automated valves that drain the water out of the pipes.

Typically, the operation handbook for these systems will include instructions on how to accomplish this correctly.

Turn off the water supply and run only one of the sprinkler heads until the water is drained to activate the automatic drainage.

The irrigation system may include a switch on the control panel to initiate the drainage process, or it may do so automatically (auto-drain).

To ensure that all of the water is removed, you will need to manually open any check valves and black flow devices.

If you have any water left in the pipes as the soil is frozen, then you are probably going to have potential problems after the soil has thawed.

While you might be lucky if you did not winterize your sprinkler system, you do not incur any major damages because the system is below grade and is located beneath the area that is frozen.

Unfortunately, if your sprinkler system is not winterized and a large amount of freezing occurs, there is the possibility that the sprinkler lines will break, resulting in leaking sprinklers in the following spring and summer months, or, in the worst-case scenario.

There is a possibility that water will freeze within your pipes, resulting in major (and costly) flood damage to both your house and your sprinkler components.

Many people refer to this service as sprinkler systems winterization or sprinkler thawing because when your sprinkler system or sprinklers are winterized, all the water is forced from the system using an air compressor in order to keep the trapped water from freezing within the pipes in the cold weather.

The blowout method removes all remaining water from the pipes and protects the sprinkler system for winter.

When done correctly, this technique forces all of the water from the sprinkler system, thereby eliminating any possibility of freezing damages during the winter months.

You could put a little antifreeze in the pipes to keep it from happening — or you could try a blow-out system, which we will explain next.

If water is shut off, but is not being flushed out or blown, you will not find out about damage until the spring starts.

Winterizing a system involves drained or compressed air blown lines, so it is essential you perform this task before the ground starts to freeze.

For those who are unfamiliar with the practice, winterization is the process of getting rid of all of the water in your entire sprinkler system, including heads, pipes, valves, and pumps, before it freezes up, and results in damage and costly repairs in the spring.

Unlike water pipes running throughout our homes, our sprinkler systems need to be winterized, performing annual blowouts to keep out the damage that would not be discovered until the spring.

Failing to adequately prepare your irrigation system and sprinklers for the colder parts of the year will lead to many damages and leaks that are not noticed until spring when your irrigation is turned on again.

The best way is to get your winterization service done before temperatures begin to significantly drop, as one cold front moves in early, and you will regret failing to take proper care of your systems in the spring, resulting in expensive repairs.

Save yourself lots of money and headaches by doing a little maintenance in the fall to ensure that your system is prepared for a brutal winter.

While you might be anxious to return the lawn to its pristine green state, it is important to remember that temperatures of 32 degrees or lower will place your lawn sprinklers at risk of freeze damage.

To activate the auto-drain, you will have to shut off your water and only run one sprinkler head until excess water is removed.

Brian is an enthusiastic and experienced gardener, which in time led him to the world of home improvement. He began by learning all about landscaping. Soon he wanted to maximize outdoor spaces in new, exciting ways; for example, by installing gazebos and fire pits. What began as a hobby soon became a side hustle, and eventually, it became his full-time job!