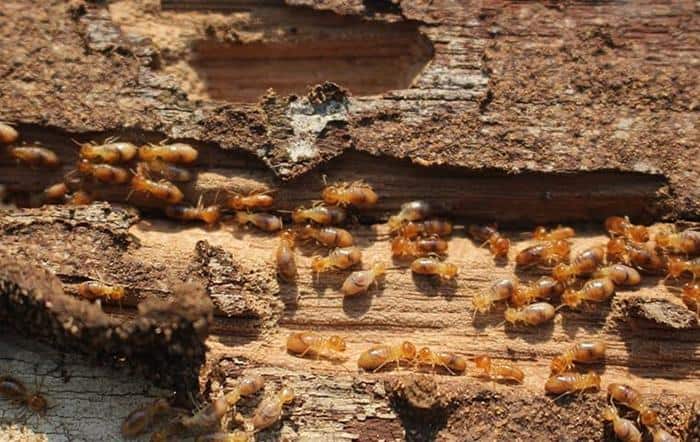 Termites enter your home and make it their living space without your notice. They channel their way through the ground and eat your wooden structures from the inside towards the outside.

If not controlled on time, termites can build nests and destroy your property within a short time.

So, how do you identify the presence of the tiny insects as a homeowner? Also, do termites make noises that you can hear around the house?

You have probably heard some low sounds inside your wall and are yet to figure out where they are coming from.

Read on to get an insight into termite noises and the type of sounds they send off.

Termites do not sleep. Hence, they cause massive damage to your house within a short period. You wonder if there is a way to know when there is a termite infestation in your home. Yes!

There are several ways to identify the presence of termites.

Some warning signs include hollowed wood when you tap on its surface and mud tubes on crawl spaces or outer walls formed by soldier termites and the colony.

The appearance of fallen wings in and around your house also indicates your home is in danger of termite destruction.

Cracked paint or the appearance of termite droppings are other signs.

Another way to know if there is a termite colony fending off your homestead is by identifying the sounds made by termites.

Since they are busy throughout the day and night, termites produce different sounds, some of which you hear when it is quiet around the house.

Is it Possible for Humans to Hear Termites In Walls?

Termites are tiny insects, and the sounds they make are faint and hence hard to be heard by human ears.

Termites such as native subterranean termites can go undetected since they dwell in the ground.

Consider using specialized equipment such as a stethoscope to listen to these termite sounds.

However, in the case of a large termite infestation,  you get audible noise as they chew, eat and move constantly.

Such a common type of termite in the United States is the dry wood termites.

As much as it is impossible to make out a single termite make a sound, larger colonies produce enough noise to raise the alarm when they infest your wooden structures.

In addition, termites communicate by banging their heads against the sides of their tunnels in case of a new food source or if they sense danger.

This continuous sound is loud enough for humans to hear.

When Do Termites Make Sounds?

Termites work and feed non-stop, and since they do not sleep, you should expect to hear constant sounds round the clock.

Termite noises are more pronounced at night when your house is quieter than during the daytime.

When termites feel threatened or get disturbed, the soldier termites make headbanging sounds.

Other instances when termites produce sounds are when the termite swarmers move through wood or as new colonies fly around.

The larger the colony, the more audible noise they produce.

What Sounds Do Termites Make Around The House?

To help identify the sounds, you should have fine ears to pick even the faint noises. The different sounds termites may produce in your home include the following:

One form of communication among a termites colony is banging heads against the sides of the walls of their tunnels.

Headbanging is the loudest sound produced by termites. The soldier termites mainly do the banging to warn the colony against danger.

The headbanging also alerts the termites of a new food source. Banging their heads results in a vibration across the colony.

Since termites cannot hear, they receive the message through vibrations. As a homeowner, you hear a fast-paced rattling sound from your wall.

Another tell-tale sign of termites around your house is a continuous buzzing or humming from your wall cavity. O

the pests may give out irregular noises at different times of the day, but the sound of termites is consistent 24/7 since they do not rest.

Constant tapings in the walls of your house are also signs of termites or other pests in your home.

The best way to determine if termites or carpenter ants harbor in your wooden surfaces is to look for frass.

Frass, which looks like wood shavings particles, gets excreted by carpenter ants as they make their way around the wooden surfaces.

Termites chew all the time. As they move and eat the parts near the surface of the wood, you may hear soft crunching or chewing sounds.

As they tunnel through the wood, other sounds of termites with their mouth include a papery rustling sound and clicking.

During spring, you may hear swarming sounds as reproductive termites fly out of their nests.

Their wings produce the swarming sound as they fly.

What Other Sounds Do Termites Cause?

When termites chew the wood on your wall or floor, a space gets left behind.

When you tap on the wood, you should hear a solid thud, but you get a hollow noise if it has spaces left by termites.

Hollow wood indicates destructive termite activity around the surface of the wood, and you should get an inspection immediately.

Also, if your hardwood floor is chewed away by new colonies of termites, it becomes weak over time. Therefore, you may hear a creaking sound when you step on some parts.

Warm air, experienced from late March through July, provides the right conditions for the termite colony to thrive.

Early detection of termite damage is crucial as it saves your house from severe structural damage, which can be expensive to repair.

Although termites are small insects, they can cause massive damage in a short time, which may result in the collapse of your structures.

Hence, it would be best if you did not ignore the low-key noises which hit your human ears.

To be safe, consider contacting a termite control company to give your house a professional termite inspection.

As already established, termites work round the clock, so you can imagine the significant damage they cause within a short period.

Therefore, you should look for the first sign of termites. Lay-about tree stumps, solid pieces of wood, or pieces of timber at any part of your home, act as hiding grounds for these colonies of danger.

Discovering the presence of termites early on in their infestation makes it easier for termite control.

The best treatment options include spot treatment, which eliminates an entire colony.

Sounds coming from your wall could also be from sources other than termites.

Such sound sources include wind blowing, vibration caused by household appliances, or contractions on pipelines. Instead of second-guessing the specific sound, it is safer to get it checked.

Waste no time hiring a professional termite technician to thoroughly inspect your wooden furniture and other wooden structures to save you a lot of peace of mind and money.

Having experienced significant success as a house flipper, I am often approached with questions about all things home improvement. That’s why I decided to start this site. My objective is to share all of the insights I have accumulated over the years so other people can design the homes of their dreams.